Rethinking with Alex Torpey is a non-commercial, totally free, nonpartisan, and thoughtfully critical discussion series and virtual forum for people to explore ways to better ourselves, our community, and our republic.

Why do we need to Rethink?

Vision: A more informed, strategic, and capable American civic ecosystem that not only addresses the needs of those living in the United States in a more trusted and effective fashion, but which once again stands up American government as a global model for prosperity, liberty, equity, and innovation.

Mission: To provide those who work in public institutions or whose work addresses community and public issues, access to a nonpartisan, thoughtful, and critical place to question everything and find practical systemic solutions to some of our most pressing needs.

Alex Torpey is a New Jersey raised and based public servant, entrepreneur, educator, and consultant. Most recently, Alex was the Business Administrator for the City of Lambertville, Hunterdon County. Formerly he was the Borough Administrator in Leonia, Bergen County.

Alex is a visiting professor of governance and technology at Seton Hall University, and an adjunct professor of public management at John Jay College of Criminal Justice.

Alex is currently an independent governance and management consultant. Currently, he is working with Sustainable Jersey as the consulting Program Manager for the Public Information and Engagement Program, providing technical assistance to municipalities to help them improve their communications and technology programs.

Previously, he was the founder and managing partner of Veracity Media, and was one of the youngest mayors in the United States when he was elected to the position of Village President (Mayor) in his hometown of South Orange in 2011 at age 23 (by 12 votes!). Alex earned his Master of Public Administration in Emergency Management from John Jay College of Criminal Justice, and his BA in the Political Science of American Law from Hampshire College.

In both Leonia and Lambertville, Alex saved local taxpayers considerably more than his compensation. Alex brought in new grant funds from county, state, federal and nonprofit sources, totaling more $1m in Leonia (~$10m annual budget) and over $100,000 in Lambertville (~$5m annual budget). Alex cut hundreds of thousands of frivolous and inefficient spending on technology and professional service contracts in both communities, including confronting and replacing deficient and expensive professional service providers. He implemented financial programs with an eye towards debt, for example laying out a plan to begin to address the City of Lambertville’s major runaway debt issue by reducing new debt authorized by 97% in his first year, as well as facilitating a comprehensive six-year capital planning and budgeting process to reduce the taxpayer impact of the City’s rising debt over the next six years. (City’s debt service was 24% of operating budget in 2019, projected to grow to 38% by 2024 at prior spending levels).

In both communities, Alex identified millions in taxpayer savings over a six-year period by implementing a transparent, new six-year budgeting process that including holistic planning around facilities, infrastructure, affordable housing obligations, redevelopment, staffing levels, technology, commercial development, rateables, sustainability, and historic preservation. By bringing together real data on current and future financial commitments, local stakeholders had, for the first time, the real ability to make more informed, strategic decisions about their priorities.

For example, as part of this new foray into helping municipalities implement long-term financial planning process that will help them better meet their community’s goals, Alex built on on his award winning transparency projects as Mayor in South Orange by creating processes that were exceedingly transparent. He experimented with new ways through data, text, graphic, and video content to communicate complex financial information in more simple and accessible formats for elected officials and communities. He implemented public budget presentations and discussions – all aimed to help support more informed local decision making by providing financial information in both short-form and long-form. View an example of newly created public presentation materials from Leonia here, and examples from Lambertville here and here.

Below is an example. This is a chart that compares for the prior five years, a) the total debt authorized by each individual municipal bond ordinance and b) the cumulative amount of debt authorized by the City. This meant to help illustrate that if you only approach financing in an ad-hoc fashion (blue label) it’s very easy to lose track of the actual total cost (red label). The solution is transparent, multi-year budget processes. 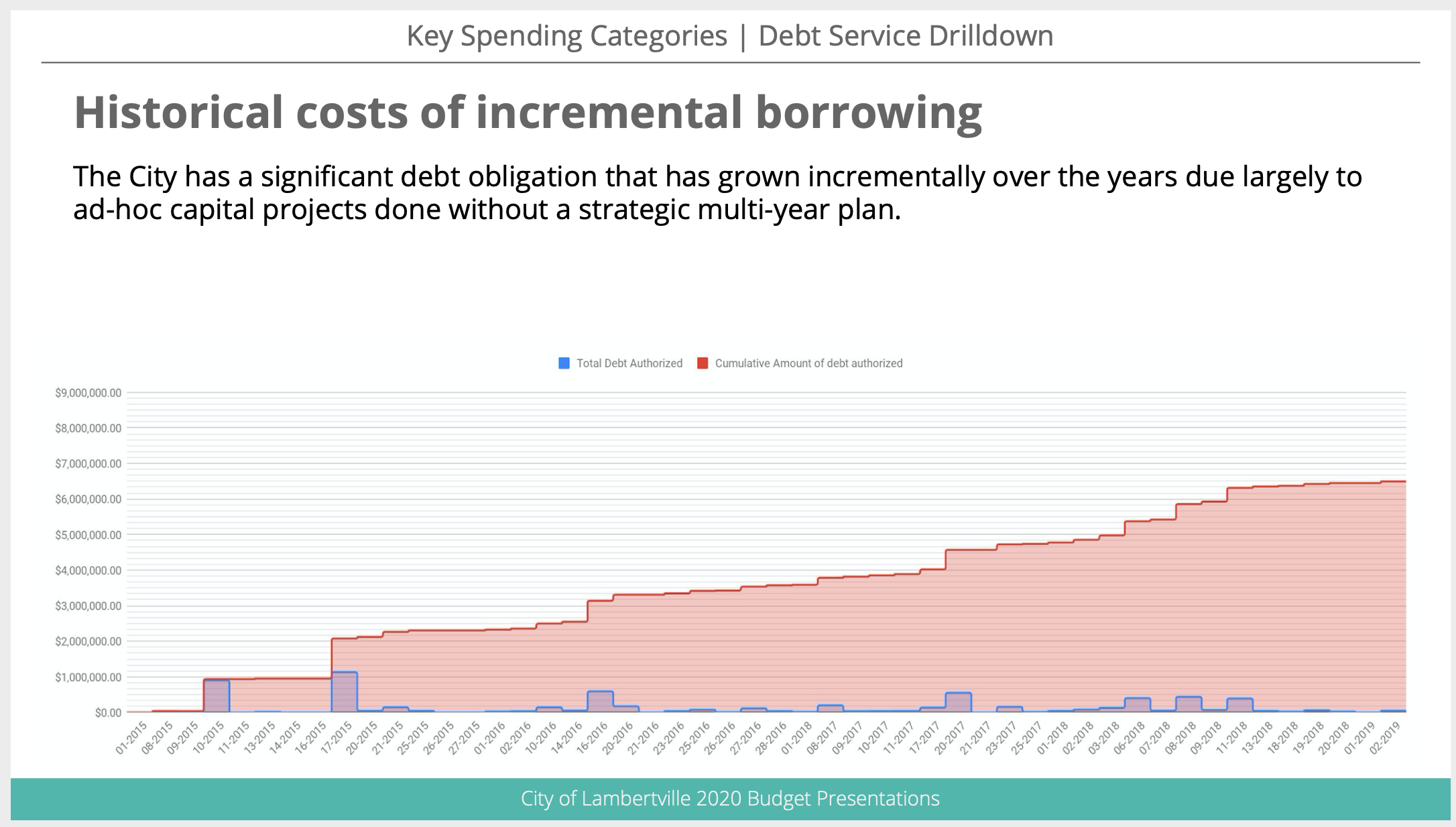 For example, in both communities, Alex quickly brought the organizations to better digital records compliance, implementing enterprise-level data archiving, backup, redundancy and security solutions that would help ensure proper preservation of records, and which helps the Municipal Clerk ensure a more strict compliance with the New Jersey Open Public Records Act. Alex implemented and advocated for internal policies to ensure strict compliance among local elected officials with the Open Public Meetings Act and Open Public Records Act, even when it at times produced pushback from the officials themselves. He also provided the public with a unique privacy disclaimer on all electronic communication with officials, that unlike many email disclaimers that attempt to designate an email thread with a government employee or official as private (which can only be done if a conversation meets very narrow and specific criteria under NJ state law), when in fact most members of the public don’t realize their email/electronic communication with all public employees and officials are actually public documents by default.  (South Orange’s email disclaimer was the first in the state). Additionally, Alex hired a Qualified Purchasing Agent (QPA) in both communities to assist in implementing more strict budget control and anti-pay-to-play policies that ensured better compliance with state purchasing laws and created more transparent contract award processes in the future.

For example, additionally, Alex sought to implement various programs and policies that helped meet publicly identified community needs. This covers a wide range of programmatic area, such as:

As Mayor in South Orange

As a mayor, Alex lead his municipality through four years of financial stabilization, new technology adoption, smart redevelopment (including affordable housing and sustainable elements), improvements to public safety and emergency management services, and a significant change in how the public and community were engaged with through numerous transparency and communications programs. A lot of exceptional work by South Orange’s team was accomplished, and you can read many more details about progress made in South Orange here.

Alex’s consulting areas of expertise include technology, civic engagement, communications, organizational development, strategic planning, management, policy/program evaluation, and emergency/risk management. Alex previously was the consulting Program Director for Run for America, where he created the new nonpartisan civic leadership program Pathways, and has consulted with organizations such as Living Cities, John Jay College Foundation, and Sustainable Jersey. Previously, Alex was a James Madison Fellow at the Millennial Action Project, on the Advisory Board of the New Jersey New Leaders Council and a member of Sustainable Jersey’s Civic Innovation and Community Engagement Task Force. Alex has spoken with audiences of all types and sizes across all of New Jersey, the United States, and abroad about these topics and more.

And when not working?

Alex is an avid outdoorsman, and enjoys taking road trips on his motorcycle, listening to or (learning how to) making music, reading or discussing philosophy, visiting and learning about new places, and fishing and camping around New Jersey and the northeast. You can find his photography on Instagram or read more about Alex here. Alex currently lives in Delaware Township, in Hunterdon County. Previously within New Jersey, he has lived in Essex, Hudson, Monmouth, and Mercer Counties, as well in Brooklyn, upstate New York, and briefly, East Africa. 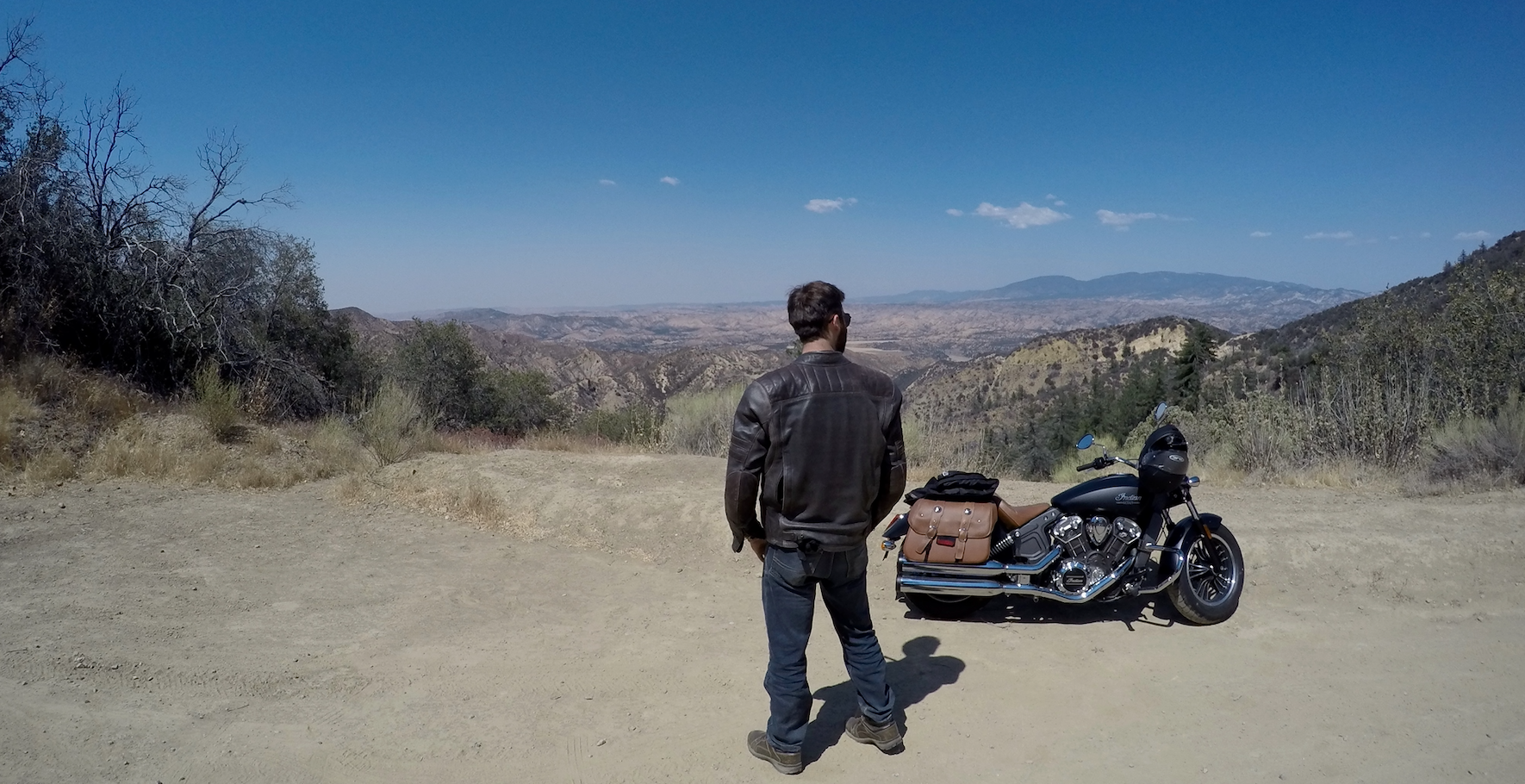 Rethinking with Alex Torpey. A totally free, nonpartisan, open forum to explore ways to better ourselves, our community, and our republic.